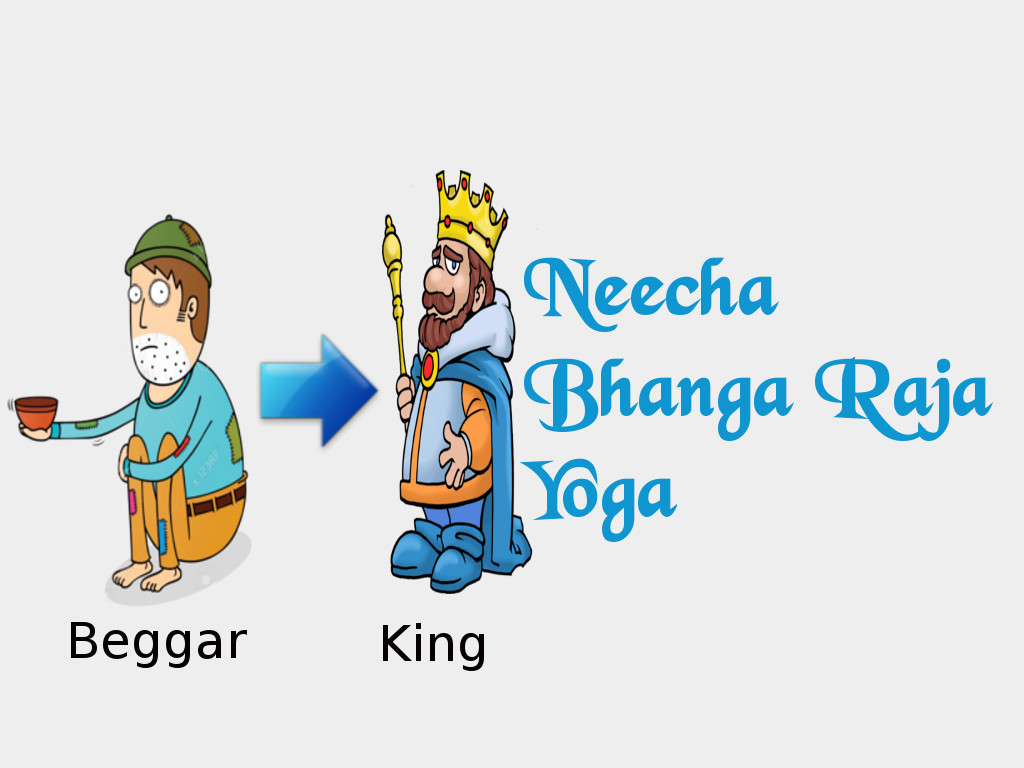 Clearly, there is a difference between neechabhanga and necchabhanga raj yoga.

In simple words, Neechabhanga Rajyoga is a state where a planet in a state of Neechabhanga achieves capabilities to bless a native with the rise in life.

Sages have given some combinations where a planet overcomes the weakness due to its debilitation.

As per Phaladeepika, following parameters should be checked to find if a debilitated planet is getting Neechabhanga or not.

1. Ruler of the sign occupied by the debilitated planet is in a Kendra position from the Moon or the Lagna.

Example suppose your Venus is debilitated which means it is in Virgo. Then the lord of Virgo which is Mercury should be in Kendra i.e houses 1,4,7,10 from ascendant or from Moon.

2. The ruler of the sign where the debilitated planet achieves exaltation is in a Kendra position from the Moon or Lagna.

Example If your Mars is debilitated which means Mars is in Cancer sign. Now Mars gets exalted in the sign of Capricorn whose lord is Saturn.Therefore to have cancellation of debilitation Saturn should be Kendra house i.e 1,4,7,10 from ascendant or from Moon.

3. If the ruler of the sign occupied by the debilitated planet aspects the planet.

Example If Saturn is debilitated which means it is in Aries then to achieve cancel of debilitation Mars needs to aspect Saturn.

4. The planet which will be exalted in the sign where a planet is getting debilitated is present in a Kendra from the Moon or the Lagna.

Example If Jupiter is debilitated which means it is a sign of Capricorn.Now Mars achieves exaltation in a sign of Capricorn and therefore Mars should be present in Kendra houses 1,4,7,10 from ascendant or from Moon to give cancel of debilitation to Jupiter.

5. If the debilitated planet is exalted in the Navamsha.

This is a common but a major rule since navamsa is a micro chart and holds the essence of D-1, therefore, planets placement needs to be checked here properly.

6. When a debilitated and exalted planets are in the same sign.

Example, Venus is in Virgo with Mercury. Here Venus is debilitated whereas Mercury is exalted giving Neechabhanga to Venus.

•There are many renowned personalities who have debilitated planets but still, they achieved a lot in their life.

•As per traditional texts, 2 or more planets in the sign of their debilitation makes one sick, poor and immoral.

But if you see horoscope likes of famous painter Pablo Picasso.

You will find 6 planets in debilitation this makes us wonder what really is happening here. Obviously, this needs more introspection and not to forget there are other factors also which works simultaneously apart from debilitation and exaltation of planets.

In Order to have full results of  Neechabhanga Raj Yoga, you need Rajyoga like Kendra – Tine or other powerful Special Rajyoga.

Neechabhanga Raj Yoga will never work in isolation. It is a yoga which helps you to take advantage of crisis just like Vipreet Rajyoga but to take advantage of such situations you need to possess some abilities better than others which come from Rajyoga like a relationship between Kendra and Trines house lords or other yogas like Panchmahapurush, Vishnu Yoga etc.